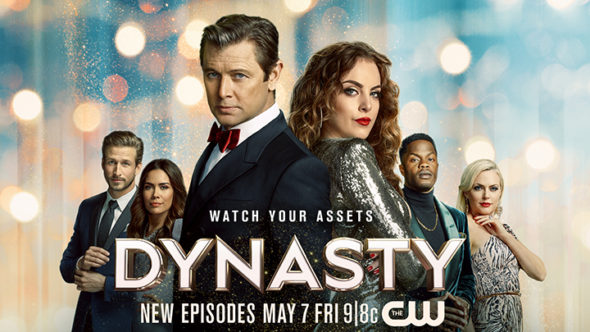 There’s no need to worry about the Carringtons and their friends and enemies being cancelled right now. The CW renewed the Dynasty series for a fifth season ahead of the fourth season’s premiere. How long will the drama continue? Stay tuned.

A primetime soap, Dynasty stars Elizabeth Gillies, Daniella Alonso, Elaine Hendrix, Rafael de la Fuente, Sam Underwood, Michael Michele, Robert Christopher Riley, Sam Adegoke, Maddison Brown, and Adam Huber, with Alan Dale, and Grant Show. A reboot of the 1981 drama series, this show centers on the wealthy Carrington family and their energy empire which they must defend against the Colbys and other adversaries, as well as from each other. In season four, bonds will be forged and broken and friendships will be tested when they head down a darker path than expected. The road ahead is filled with betrayal, extravagance, and deception for our favorite billionaire family. There’s always someone lurking around the corner ready to destroy a Dynasty.

6/5 update: You can see the latest night’s ratings in context.

For comparisons: Season three of Dynasty on The CW averaged a 0.10 rating in the 18-49 demographic and 358,000 viewers in the live+same day ratings.

Note: These are the final national numbers (unless noted with an “*”). These are different from the fast affiliate numbers which are just estimates of the actual ratings. The final nationals are typically released within 24 hours of the programming or, in the case of weekends and holidays, a couple days later.

What do you think? Do you like the Dynasty TV series on The CW? Are you glad that it’s been renewed for a fifth season?