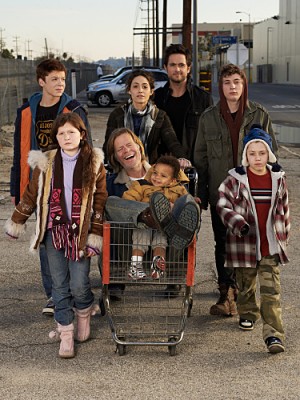 TV show description:
Based on a UK TV series of the same name, the dramatic TV show follows Chicago’s Frank Gallagher (William H. Macy) — the proud single dad of six independent and resourceful kids. A hopeless alcoholic, Frank can usually be found at the bar spending what little money the family has, scheming on how to beat the system to support his addictions, or passed out on the floor.

His latest meal ticket is his agoraphobic neighbor Sheila (Joan Cusack), who keeps him housed and well-fed as long as he submits to her outrageous sexual domination. But if Sheila comes to terms with her phobia, she may be moving on and Frank may be moving out.

Fiona Gallagher (Emmy Rossum) is the eldest Gallagher child, so most of the family responsibility falls on her young shoulders. A blossoming young woman, she takes it all in stride. She works a few dead-end and minimum wage jobs to bring in money and enjoys going out dancing with her girlfriends. Pursuing her heart is Steve Wilton (Justin Chatwin), a young man who has a lot of moxie and a lot of money.

Second child “Lip” (Jeremy Allen White) — short for Phillip — is by far the smartest Gallagher. He’s a straight-A student, but he also has a penchant for trouble that threatens to derail him academically. He uses his intelligence in various odd jobs to make money, such as running an ice cream truck in the summer that sells beer and marijuana or taking the SATs for fellow students.

The third Gallagher child is Ian (Cameron Monaghan), the one most like their mother. He’s in Army ROTC at school and is considering applying to West Point if only he can get his grades up. He works at a local grocery store, where he’s having a gay affair with his married Muslim boss.

One of the middle Gallagher children is Debbie (Emma Kenney). She’s helpful, sensitive, and has a good heart. She longs for familial stability and was even willing to pretend a complete stranger with dementia was her grandmother.

Carl (Ethan Cutkosky) is the second youngest Gallagher kid and a lot of trouble. He’s a daredevil and a bully with a destructive streak a mile wide. Still, he’s not afraid to go to extreme measures to help the family make ends meet. Youngest son Liam (Brennan Kane Johnson & Blake Alexander Johnson) is black, despite having two white parents.

Veronica Fisher (Shanola Hampton) is the Gallaghers’ sassy and sexy neighbor. She’s always willing and able to lend a hand, go dancing with gal-pal Fiona or party down with Frank. She’s a go-getter with a lot of jobs, including an aide at the local assisted living facility, and a bartender at a Chicago hot spot where Fiona also works.

Veronica and her man, bartender Kevin “Kev” Ball, are totally hot for each other, and their wild sex life borders on adventuresome. He’s also the Gallaghers’ neighbor and friend. He’s a good guy who’s willing to give Frank drinks on credit and cash his disability checks for him, and take in a troubled teenage foster child, Ethel (Madison Davenport).

Series Finale:
Episode #134 — Father Frank, Full of Grace
Ian and Mickey shop for furniture; Kev and V seek buyers for the Alibi; while Lip settles for a new job, Carl finds his calling on the force; Debbie plunges into a dangerous world when she meets someone; Frank faces his mortality.
First aired: April 11, 2021.

What do you think? Do you like the Shameless TV series? Do you think it should have ended with season 11 or, been renewed for a 12th season?