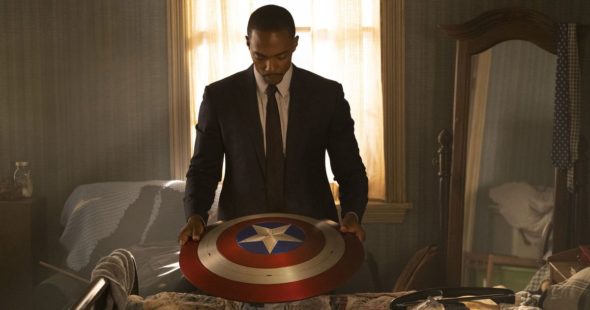 Will there be more than six episodes? Has The Falcon and the Winter Soldier TV show been cancelled or renewed for a second season on Disney+? The television vulture is watching all the latest cancellation and renewal news, so this page is the place to track the status of The Falcon and the Winter Soldier, season two. Bookmark it, or subscribe for the latest updates. Remember, the television vulture is watching your shows. Are you?

Streaming on the Disney+ subscription service, The Falcon and The Winter Soldier is set in the Marvel Cinematic Universe and stars Anthony Mackie, Sebastian Stan, Daniel Brühl, Emily VanCamp, and Wyatt Russell. The Falcon, aka Sam Wilson (Mackie), is a veteran US Air Force Pararescueman who flies using a jet pack with articulated wings. The Winter Soldier, aka Bucky Barnes (Stan), was Steve Rogers’ longtime friend and fighting partner in World War II. He was lost and believed to be dead but returned 70 years later as a brainwashed assassin. Both Falcon and Winter Soldier help to defeat the alien Thanos and, at the end of the Avengers: Endgame feature film, an elderly Rogers passes the mantle of Captain America to Wilson. Now, six months later, Wilson and Barnes team up for a global adventure that tests their abilities and their patience.

The Falcon and the Winter Soldier is a mini-series so a second season renewal isn’t expected. Could the show be revived at some point? Stay tuned for further updates.

Unless they decide to publicize viewership, it is often difficult to predict whether Disney+ will cancel or renew a show like The Falcon and the Winter Soldier for season two. In this case, it seems clear that this show is a close-ended mini-series so episode six is the end of the show. That being said, if a second season fits with Marvel’s plans for the characters in the Marvel Cinematic Universe, I have no doubt there will be another round. I’ll keep my ears open and an eye out for news, and will update this page with breaking developments. Subscribe for free alerts on The Falcon and the Winter Soldier cancellation or renewal news.

The Falcon and the Winter Soldier Cancellation & Renewal Related Links

What do you think? Do you hope that The Falcon and the Winter Soldier TV show will be renewed for a second season? How would you feel if Disney+ cancelled this TV series, instead?